A Brief History of Inflation Targeting

Economists and central bankers in the 1950s, 1960s until the early 1970s did not believe that central banks could influence employment, aggregate demand or inflation...

They believed that monetary policy (the macroeconomic policy taken by a country’s central bank to manage the money supply and interest rate in an economy) couldn’t be used to achieve price stability by keeping inflation low. Therefore, Fiscal Policy (the policy used by a country’s government concerning tax policies and spending to influence an economy) was the predominant tool to fill the gap between potential output and private demand. This, however, had changed in the late 1970s and early 1980s when the same group of experts discovered the magical power monetary policy has on an economy, which was demonstrated by former chairman Paul Volker who brought inflation down in the US to around 4% in 1987 from over 11% when he was appointed the chairman of the Federal Reserve on the 6th of August, 1979. Volker managed to reduce inflation by focusing on monetary aggregates which refers to the amount of money in circulation in a country. The chart below demonstrates the U.S inflation rate between 1979-1987: 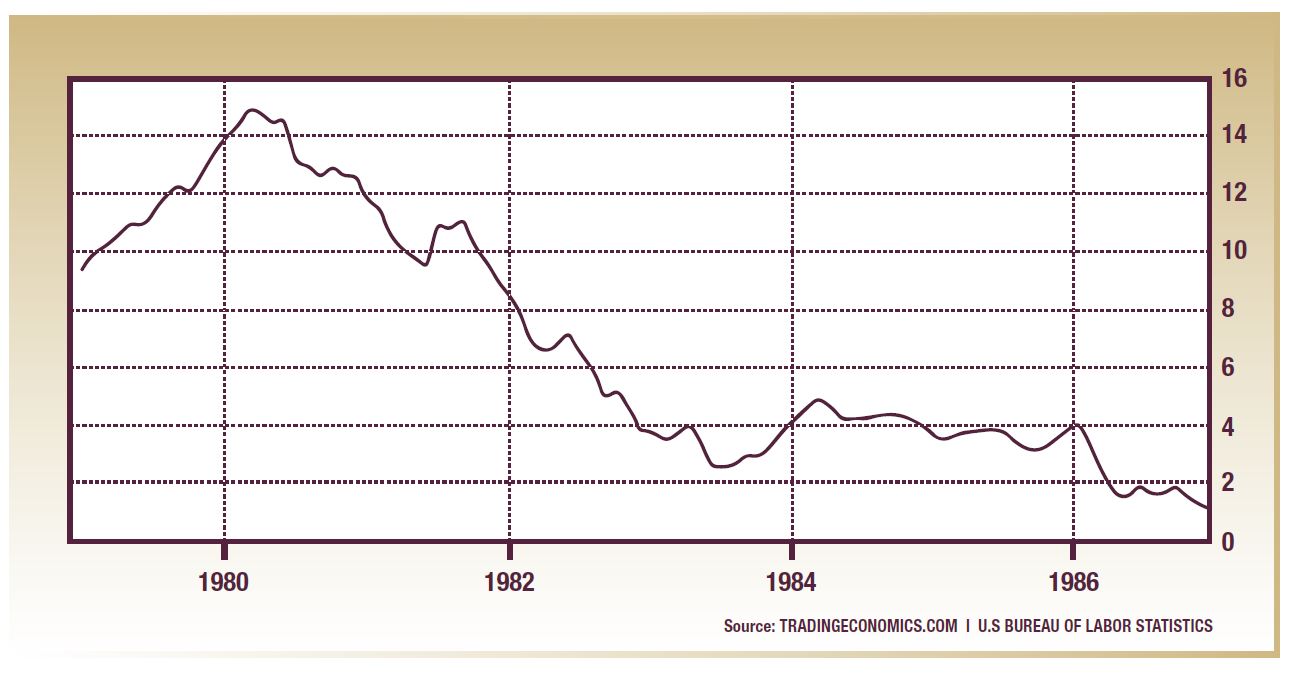 Also, both the West Germans and Swiss were committed to low inflation and used the same concept of monetary aggregates to affect inflation which in turn made their respective economies perform better than their European counterparts between 1970 and 1985 as measured by comparing the Consumer Price Index (CPI) of both West Germany and Switzerland to a bundle of 12 European Countries as shown in the chart below 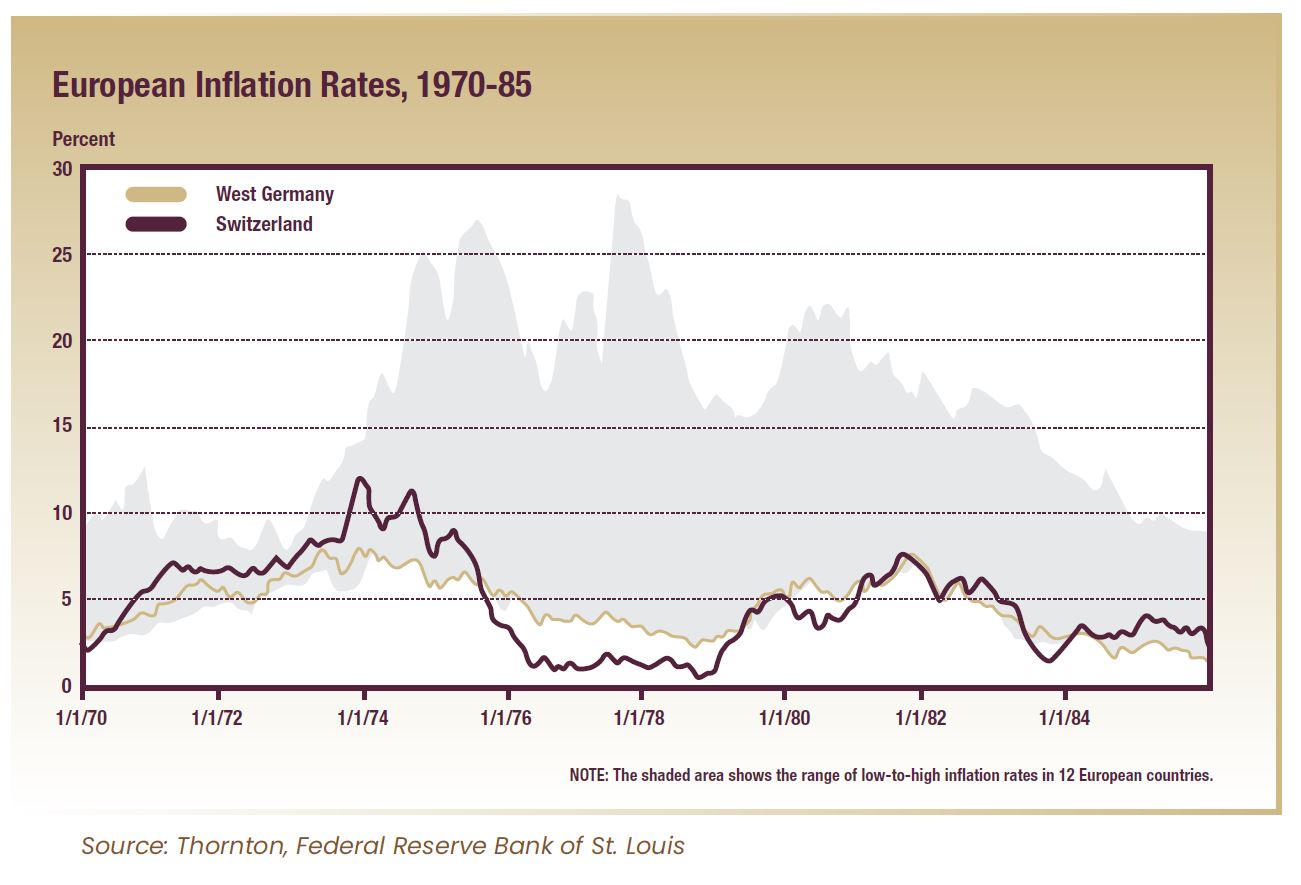 Consequently, this has led central banks around the world starting in the late 1980s to adopt what is known as inflation targeting, which is a strategy followed by a central bank to achieve a specific inflation rate. The core principle behind it is that long-term economic growth can be achieved by maintaining price stability, which can be done by controlling inflation. A central bank can achieve the desired inflation rate by lowering interest rates, which will boost inflation and economic growth, or increasing interest rates, which will slow inflation and economic growth. Inflation Targeting was first pioneered by the Reserve Bank of New Zealand in December 1989 (Reserve Bank of New Zealand Act). The Bank of Canada (joint declaration by the Bank of Canada and the Canadian Government) and Bank of England both followed suit in February 1991 and October 1992 respectively, and later many more central banks around the world adopted the same strategy. The Federal Reserve in the U.S uses the Personal Consumption Expenditures (PCE), which is a benchmark for consumer spending for some time as a benchmark for its inflation targeting policy. Other Central Banks such as the Bank of Canada uses the Consumer Price Index (CPI), which is an index that measures the changes in the price level of a weighted average basket of consumer goods and services as their benchmark. Most central banks in the developed world (The Federal Reserve, The ECB, etc.) have their inflation target at around 2%. This number provides a buffer to central banks against the risk of having a deflation (the decrease in the general price level of goods and services).

As we mentioned earlier, the Federal Reserve in the U.S has a dual mandate:

1- Maximum sustainable employment: The highest level of employment an economy can sustain while

having stable levels of inflation

2- Price stability: Achieve low and stable inflation (which is 2% in case of the Fed)

The committee at the Fed which is responsible for policymaking must keep its eyes on the two sides of the mandate when making decisions. Historically, there has been a tradeoff between unemployment and inflation (known as the Philips curve), which states that low unemployment goes hand in hand with high inflation (wage inflation) since falling unemployment rate signals an increase in demand for labor, which consequently puts upward pressure on wages and vice versa, high unemployment accompanies low inflation. To demonstrate this, let’s look at the chart below which represents the relationship between inflation and unemployment from 1950 until 2020: 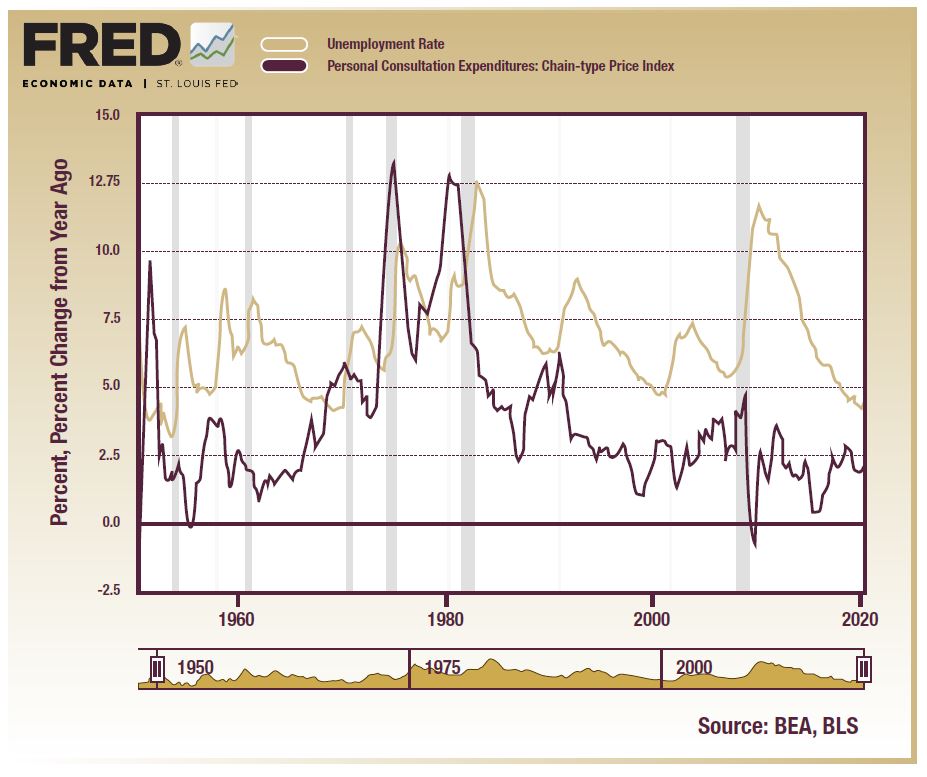 However, if we look at the relationship between unemployment and inflation in recent year (from 2012-today), the Philips Curve tends to have flattened and the relationship doesn’t look as it once was as shown in the chart below: 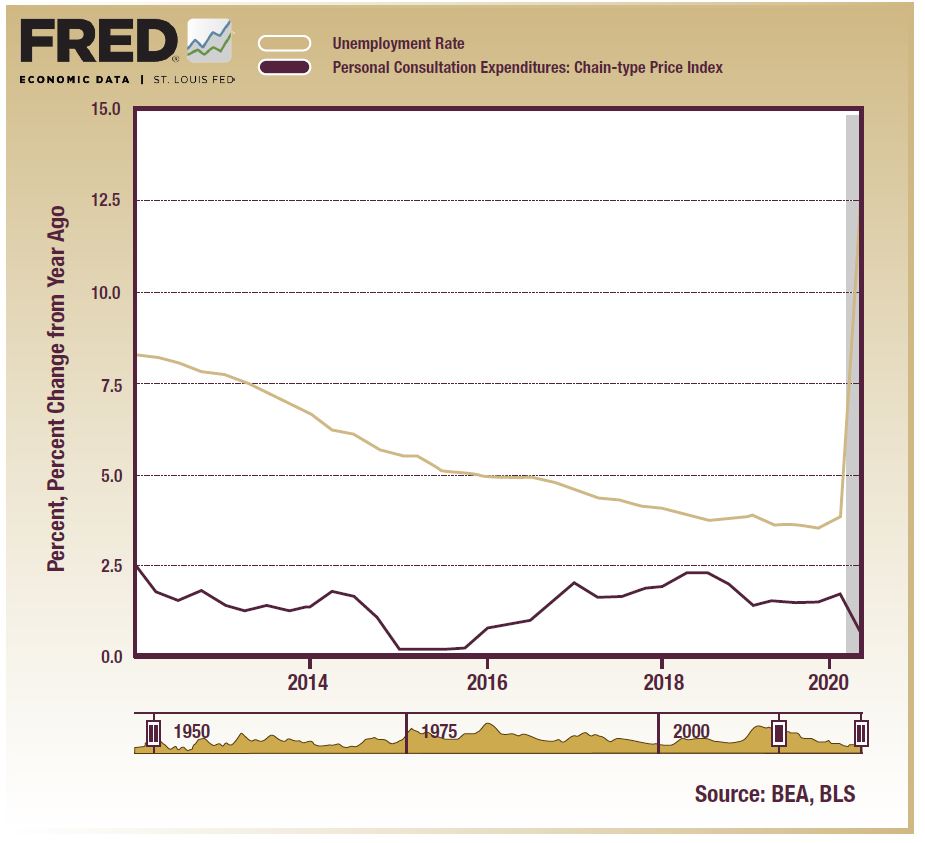 Fast forward to August 27, 2020, The Federal Reserve decided after a year-long review to let inflation go above that 2% and unemployment go down since it hit 10.2% back in July 2020. The Fed will no longer stick to a specific inflation target as it has implicitly done since the early 1990s and implicitly since 2012 announced by former Chairman Bernanke, but will now target an average inflation rate of 2% to support the labor market and broader economy; meaning that inflation can run a bit higher than 2% following periods of inflation below 2% and below 2% following periods of inflation above 2% to achieve an average inflation rate of 2%. However, the Fed didn’t explicitly give any guidance regarding any inflation numbers and Chairman Powell said ‘’in seeking to achieve inflation that averages 2 percent over time, we are not tying ourselves to a particular mathematical formula that defines the average’’.

We think that average inflation targeting could work. At the same time, historically it has been very challenging to control inflation once it starts rising, and the above 2% inflation that the Fed wants to shoot at might end up causing more inflation than it can control. Thus, we believe that the Fed should be very cautious with allowing inflation to go above 2% and constantly reassess the economic situation.

Brochure
AQUILLA NUMMUS © . All Rights Reserved.
aquillanummus.com is operated and owned by Aquilla Nummus Ltd,
which is authorized and regulated by the Cyprus Securities and Exchange Commission (CySEC), CIF License no. 345/17
Developed by Radevic Team
Privacy Policy